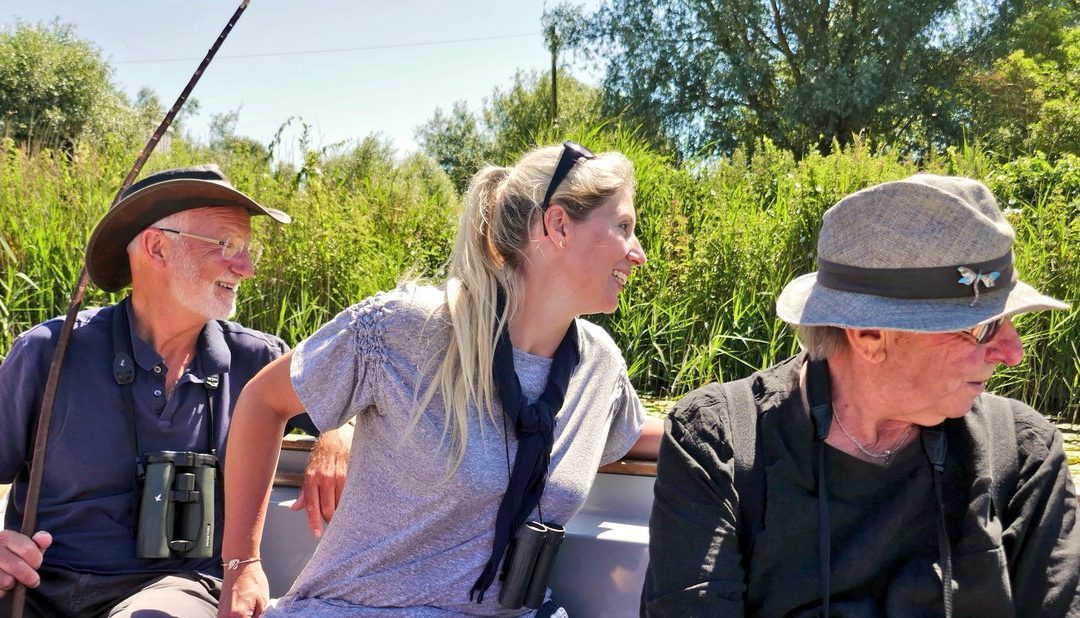 Magic in the reeds: A day at Wicken Fen with Professor Nick Davies

Show thee a jay’s nest, and instruct thee how

To clustering filberts, and sometimes I’ll get thee

Young scamels from the rock. Wilt thou go with me?”

Not for a moment am I likening Professor Nick Davies, of Pembroke College, Cambridge, to Shakespeare’s Caliban, except in his knowledge of the secrets of the landscape and his willingness to share them. My day at Wicken Fen with this charming, impressive gentleman was a prize that money simply could not have bought me. And all because Michael Longley chose my small poem, ‘Old Lady Moth’ as a winner in the Rialto poetry competition.

We met at the oldest National Trust reserve in England last Friday – a day I had been given off by the school where I teach and so all the more enjoyable for that. My friend Emma and I arrived at 9am and, as she was chuckling about my need to arrive too early, Nick approached us in the car park carrying a reed warbler’s nest, carefully tied with green string, its supporting reeds intact, its eggs predated the previous day by crows. He presented me with this gift; we felt the smooth interior of this little crucible, admired the spider’s silk tethering it securely to its reedy stilts. He tells me it will keep for years safely in a vase.

We sat on the boards, feet dangling near the glinting water, and watched whirligig beetles careering off each other’s ripples. Emma, who teaches physics, and Nick speculated on a possible science project to unlock their energies and mysteries. The moorhen chicks played on lily pads. Food was plentiful right now, explained Nick. At 9.30am Matt Howard of the RSPB and Michael Mackmin, editor of the Rialto, arrived right on time. As we set off, Nick pointed out with his staff (an impressive, deep-red, smoothed and polished stick that characterised him as a kindly Prospero) a lily pad that a tiny creature must have bored through it in its nascence, causing a beautifully regulated pattern of perfect holes on its unfurling.

Walking with Nick I soon felt braver asking questions I knew were embarrassingly basic; he was bound to know everything and that released me to ask anything. He was a natural teacher, full of passion for his field and excitement to share it. He had brought with him from the museum a nest with three eggs laid by a reed warbler and one by a cuckoo, only slightly larger but perfectly matched in pattern and hue. An expert in trickery, the substitution takes a cuckoo just ten seconds to effect. Breath-taking sleight-of-wing audacity.

We arrived at the spot where we might see a reed warbler feeding its chick – or rather a bird with whom it shared no genetic connection. When Nick pinned back the reeds with canes he exposed the neat nest with the two-week-old cuckoo chick almost spilling over its sides. In the full sun it was as though a chocolate ice-cream was melting atop its cone. We were still and almost silent for half an hour as the reed warbler mother fetched flies and fed it, fetched more, giving herself tirelessly. I came to think less about the chick and more about the capacity some creatures have to love and care for all things. I think we all felt admiration and warmth for the little bird who, in a week’s time, would lose this ungainly squatter, none the wiser as to its origin. Till the next time she was needed. 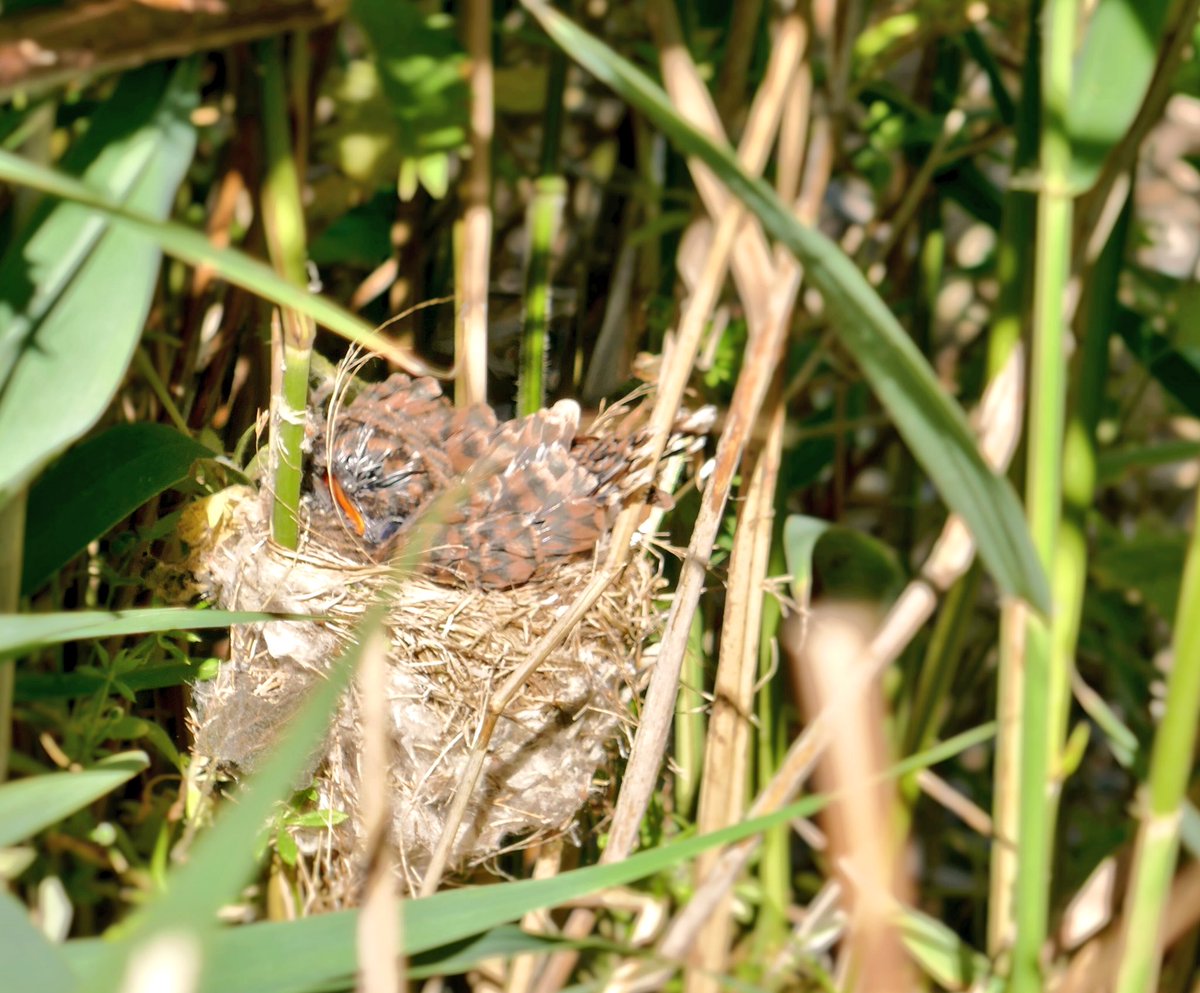 Our boat trip on Wicken Lode took us down among the reeds, which had become by now a whole hidden world of bustle and intrigue. As we slid along the dragonflies came with us, often in pairs, their wings whirring in the high sunshine. I saw my first kingfisher; it flew along before our boat as if it somehow knew my slow, ill-tuned eyes would miss it otherwise. There is such wonder in a moment like that; the urge to let my son, Ru, know it had happened caused my heart to swell. More moorhen chicks, a swan family; the lode teemed with busy, buzzy life. Once back on land the peace and slow pace of proper heat and sun reasserted itself. We ate lunch and cake, talked poetry and birdsong.

Nick wanted to hear ‘Old Lady Moth’ once more. We walked and paused in hides, learning the little grebe, the woodpecker, the sedge warbler with its grating song. And when we were alone, just the five of us together, I introduced the poem and read it. It felt right to read it in the cobwebby dimness of the small hide; it was rather like the shed I had found her in, that moth that last winter had inspired the poem. Then Nick was keen to see the words on the page, consider the construction, and ask me about the practical business of the writing. Here I could share, however inadequate, my bit of knowledge with him, my passion for the details and the pleasures of poetic crafting. I’m not saying it was much of a swap – I got the better deal – but I hope it enhanced his day’s work. He took us back by the marsh peas; their delicate mauve sprigs new to me.

A final cup of tea, more chat, and then it was time to leave. We had all become acquainted through the magic of nature and place – the very tenets of the Rialto competition. We had all talked birds and poetry, whether enthusiasts or experts. It felt wonderfully free of hierarchy but perhaps that was because we all came to it ready to be enchanted and enriched by one another and the world we shared for that day. Nick held us safely in his nest of Wicken Fen and nurtured us all. I am immensely grateful to Michael Mackmin and Matt Howard for running the competition, to Michael Longley for choosing my poem, and to Nick Davies for being my prize. 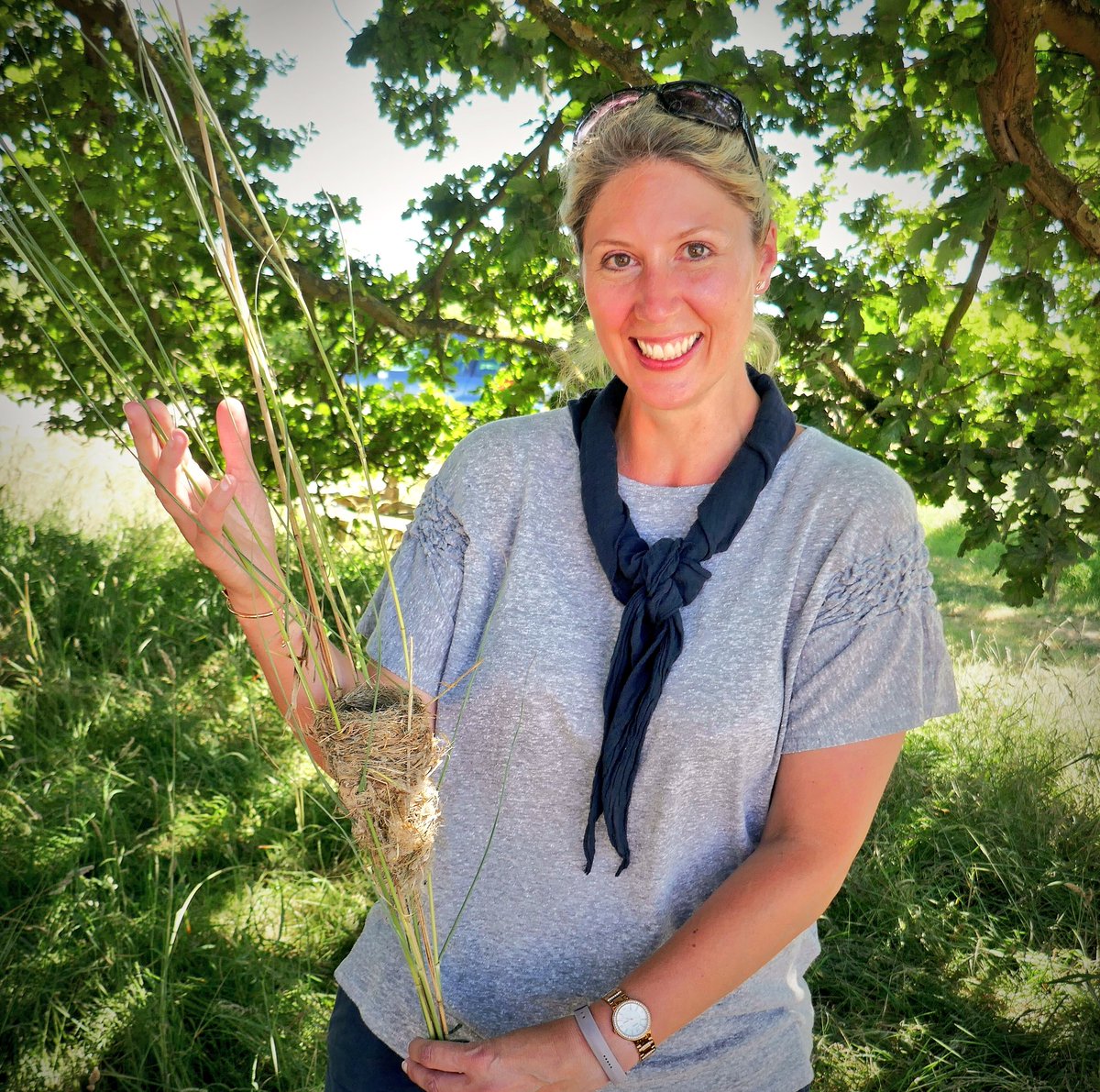