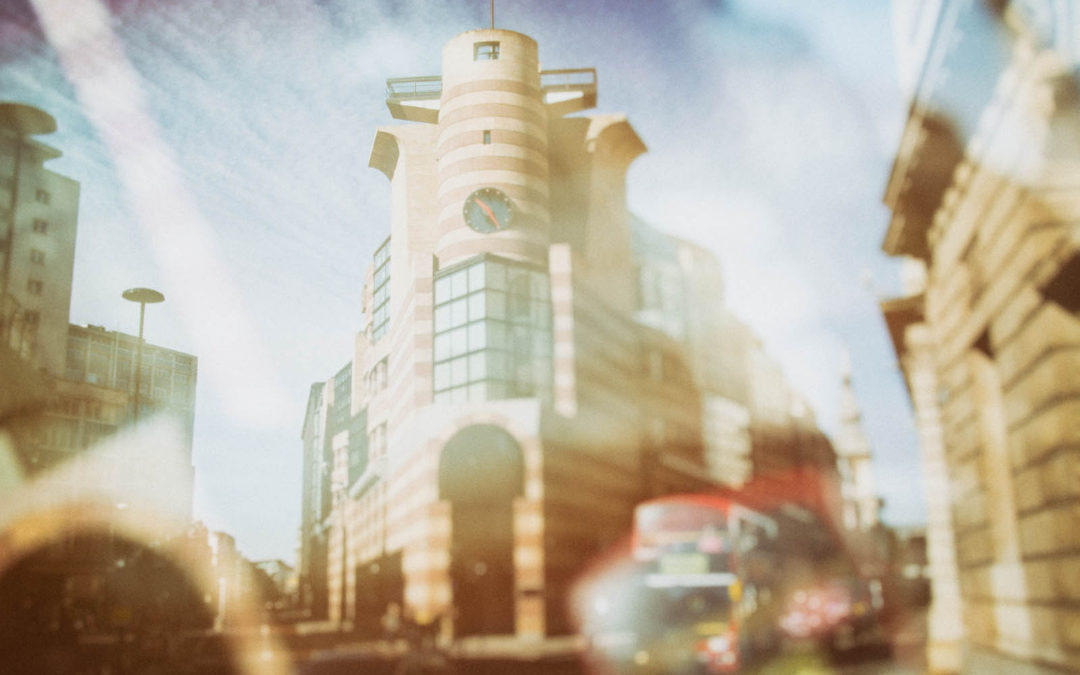 Shoot up in the fast lift,
poke the faux gras with toothpick heels.
Late lunch at the Coq d’Argent –
accept a drink, plan your exit.

After two pm the old religion can be smelt –
some urban plague myth – even here,
halfway to the holding stacks
of City-bound planes.

Look out to where domes are clouds,
black antennas stricken trees, people
blips fading from someone’s radar.
A good place to fail.

Tender is the man-made view.
Look down where a scrawl of red tail-lights
sings stop in the name of love
and windows laugh open.

Two sips of Sauvignon Blanc and all London
is under you, your parapet bends
eye-level with skinny cranes,
arms turning in a show of listening.

Which means that if you are an architect or a developer looking to leave a distinctive impression on The City, you not only have to come up with something suitably arresting, but then be prepared to take on the brickbats of those who really would rather prefer it if things didn’t have to change thanks all the same.

This is all said because the slightly odd, faded pink building that you walk past when you’re on your way to, more like past, the Bank of England, well this was once the enfant terrible of new developments in The City – not quite carbuncle or eyesore, but a postmodern wreck built too late – 1997– when kitsch and cheer and daring were on their way out, to be replaced by a different form of cutting edge conformity.

And now? People know it as mostly the best rooftop terrace in London. Well, most famous. Or more realistically, most notorious. Is it too bleak, too much, to point out that it has become a favoured spot from which people have chosen have chosen to fall to end their lives? It’s 80ft, by all accounts.

I’m not sure to what extent Robin Houghton wants to know – acknowledge – this bleak undertow to the building in her poem. I mean, on my second reading of the poem all I could see was death: “accept a drink, plan your exit”, the “urban plague myth”, “A good place to fail.”

But of course we also see what might have led someone to this place, this moment – the ending of ambition, the recognition that something else is out there, beyond the accumlation of capital – say hello to those “holding stacks / of City-bound planes”; and you can imagine on sunnier days that the windows and the red lights are lighter, brighter and do not say the end.

Let’s look up not down. This is not a bleak poem. This is a celebration of how you, yes even you, can conquer The City, defy its past to earn the right to lunch in one of its most favoured spots, and from its peak eye your kingdom: “all London / is under you, your parapet bends / eye-level with skinny cranes, / arms turning in a show of listening.”

Take off your “toothpick heels” – you’ve earned your spot in history.