“Din of voices”: on some poems in The Rialto 89 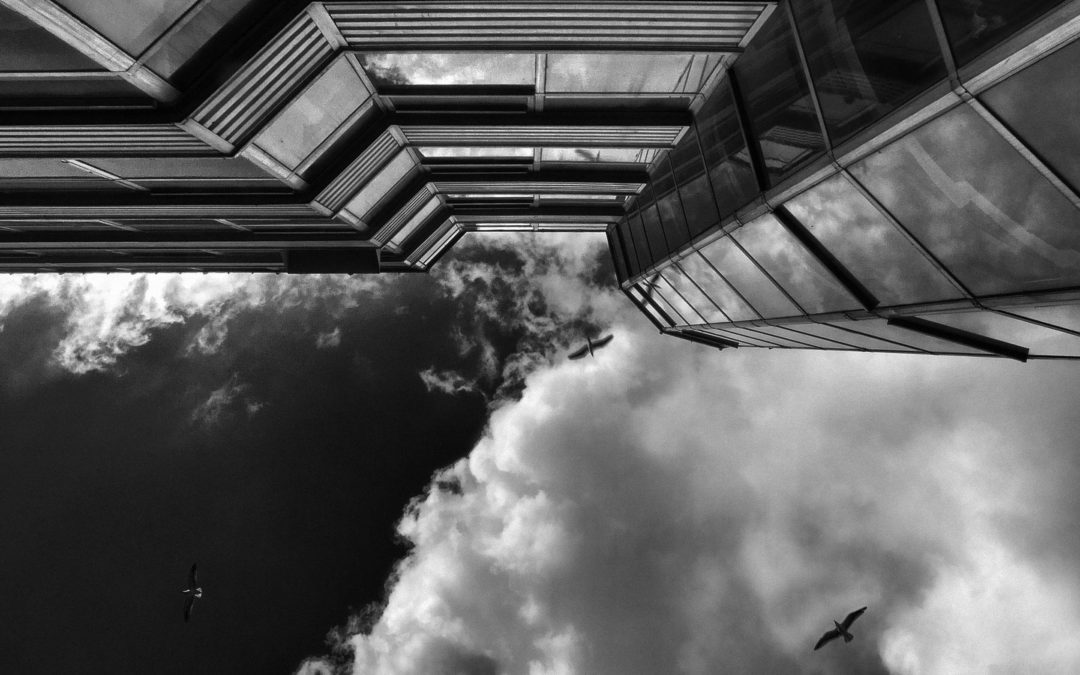 Since issue 89 of The Rialto had its “official” launch at Poetry in Aldeburgh recently – with barnstorming readings from Seraphima Kennedy, Richard Osmond and Elisabeth Sennitt Clough, hosted by editor Michael Mackmin – I thought now might be a good time to shine an appreciative light on a few of its poems. I’ve focussed on the first fifteen pages (the section I had the pleasure of assembling) which, though taking up only a quarter of the magazine, will – I hope – stand in for the electro-luminesce of the whole. If you haven’t already, may these words encourage you to seek out a copy or several.

Richard Osmond opens things with a sequence of six poems about the attack at London Bridge in June 2017. Alongside a matter-of-fact, witness account of events are a startling series of translations of the Quran and Beowulf. Together, these constitute an important reflection on how we make sense of random brutality, both individually and as a culture. The last poem here, adapted from Beowulf, describes a group of half-drunk “battle-blokes” making idle boasts in a meadhall, as they “await the attack, knives out.” That phrase knives out suggests – resonantly, horrifically – the kind of mentality which precedes and is reinforced by every “terror attack”. Are these potential victims or the attackers themselves?

Following Osmond is Hannah Lowe, with ‘British Born’, where she deals (similarly but differently) with the fault-lines between cultures. The poem centres on an argument between teachers about a girl who wears a “black hijab and naqib” to school – “Our staff room bristled,” says Lowe, “Jenny wanted rules” – and ends with a group of boys whose boxers spill “from their jeans, half-mast”. According to Wikipedia, a flag flown at half-mast can signal “respect, mourning, [or] distress”. Here, perhaps, those jeans slung at half-mast indicate something else: insouciance, or the shapeshifting ability of younger generations to move casually between traditions; to be half in and half out simultaneously.

The theme of halfness continues with Seraphima Kennedy’s powerful ‘Firemouth’, in which the poem’s speaker is “driven half-mad”. A series of double-spaced single lines, couched in the first-person and present continuous (“I have… I have”), run through the ways in which the self is forced to adapt and change just to stay alive in a violently unfair society. Rather than having a silencing effect, these enforced metamorphoses leave this speaker with “a tongue to speak/ a mouth on fire”. Kennedy’s other poem here, ‘Budget’, is no less vitally angry work, impossible to read without considering the traumatic shadow cast by Grenfell. These are elegies in which the refusal to mourn is channelled into a radical rage.

In Ian Humphreys’ poem – another elegy of sorts – rage against injustice becomes mournful celebration. “Come back, come back,” sings the speaker,

you glistening boys,
you clerks and scholars, farmhands, plumbers,
you make-up artists, money men, you lives

This is poetry exercising one of its oldest and most necessary roles: listing and lamenting the dead. Cut down before their time, these “glistening boys” (echoing Whitman’s “young men glistened with wet”) have left their songs “half-sung”. But the poem being a domain – a club like “Bang, Scandals, Napoleans, Spats, Subway, Copa’s and Heaven” – their voices find themselves sounding out again in sweet-sad unison.

Joseph Minden’s ‘Mothership’ is an elegy straining at the bit, lamenting the past with sadness but not a shred of pity. It begins:

Why are you looking out of the window, mummy?
It’s only a window. It’s about forcing your dream life
into your waking life. And your dreams suffer.

According to Freud, the “threads of association” we form in our waking life naturally “converge”, whereas in dreams they “overlap and interweave”. Minden’s two poems show the world as seen from the perspective of a speeding train, which, “blurring the trees into one/ another”, makes a lorry look like a stag. Nursery rhyme, history and Victoriana overlap and interweave, along with “business parks/ swaggering in the heat of high summer”. Dreamy stuff, indeed.

In Khairani Barokka’s ‘time machine’ the combined pain of illness and post-colonial malaise – a “flexible hurt”, as the speaker puts it – is overwhelming, the “imagined-coherent universe” breaking down as Big Ben “unfolds” towards her: “EMPIRE, it pummels”. What empire gives with one hand (“balms” and “medication”), it takes with another (felled rainforests). Or, as Barokka suggests, it inflicts wounds only to claim the moral high ground of tending to them. Here, Barokka restores the felt pain of abstract EMPIRE, each word being wrenched from a place at once historical and personal/bodily.

Just as Barroka’s language – her riven syntax and word-choice – struck me immediately, so too was I bowled over by the “ning nang natter” of Helen Kay’s poems. Both poems here are addressed from an “Elderly Primigravada” to her dyslexic son, but son and mother are mingled in dialogue, “dissolved in the din of voices”. This is the pre-literate ocean in which parental relationships form and sounds become (just about) cognate with words. Kay’s poem take us on a linguistic deep-dive, “the seedling syntax” of her son’s face and his quirks rooted (beautifully) in how she writes about him.

Elisabeth Sennitt Clough’s ‘Anguilliform’ is also, but more harrowingly, about a relationship between a mother and child. Her use of form – putting solidi (most of the time) in place of line breaks – gives the poem a provisional quality, a sense of unfixedness, which mirrors the poem’s anguilliform (eel-like) imagery. In devastatingly precise stanzas, the speaker describes several early-childhood separations – glavings, as she puts it – in which her mother is always slipping out of reach, daughter wriggling desperately after her.

At its opening, the tone of Patrick Mackie’s ‘In the Gloom the Gold Gathers the Light Against It’ is dry and distant: “The Strand is where you go, so we discovered,/ if you to buy actual gold as an investment.” But as the poem progresses it starts to dissolve under the influence of the nearby Thames, described as a “brain teeming, or hunting,/ amongst the soluble wharfs”. The “or”-sounds in “wharfs” become a cacophony by the end – “ore… oars or… or” – as though to mimic the way in which any commodity, shiny or not, becomes senseless (un-gleanable) through endless trade and tarry. The teeming brain-water will always win out over the City’s best.

As in the new series of Blue Planet, Phoebe Stuckes’ poems seem powered by a sense of their own endangerment. ‘$$$’ ends “So broke/ I stink of pennies. I am ruined.” The poem itself isn’t “broke” or “ruined” but, teetering on the edge, captures that moment just before “falling” when anything appears possible, even “crack[ing] the heavens”. This phrase might mean breaking into the heavens or just breaking it and bringing the whole firmament thundering down. Such ambivalence could describe the experience of reading Stuckes’ astounding work.

One thing linking a lot of these poems is a concern, to put it broadly, with surface and what lies beneath. In Hugh Foley’s ‘Argument (with Spinach)’, the speaker begins with a refection on the comments that lie beneath a Youtube video, everybody

mourning
someone, it would be easy to say,
because they actually mourn
their own collective youth,
but people really did die or leave them.

This is characteristic of Foley: deadpan and wry, but capable of suddenly and brutally turning back on himself (and the reader). It’s easy to laugh at the maudlin comments people leave online, forgetting the real lives – and griefs – behind and beneath them. The poem goes on to question – in lovely, meandering syntax – the nature of permanence, and those structures (like concrete, or YouTube) which outlast our brief bootprint.

Adam Crothers closes out this 15-page section – before a sequence of heartrending new poems by Hannah Lowe – with ‘Sincerity’. I feel like this poem gets at something which the other poems here – maybe all poems anywhere – are scratching at: how to express sincere feeling in contrived language. In Latin, sincerus referred to a clean, pure sound. A poem, though, is sound polluted by sense. Though we might aspire to absolute whalesong, we also need language to communicate information (and perhaps, in its modern usage, “sincerity” implies putting a statement’s communicability over its sounding-goodness). Crothers’ sonnet does sound good, though, and through a structure of lovingly contrived homonyms and puns – bare/bear, ironise/ironed out – manages to hint at bare feelings, barely born.

I hope you’ll agree that these are special poems – poems which bear witness and mourn and rage and celebrate what it is to be stupid, language-forming creatures in the world today. Read them out to yourself and to your loved ones, murmur them by starlight until their vowel music approximates the movement of the spheres, or take them apart with clamps and forceps. These are poems which can’t be murdered by dissection.