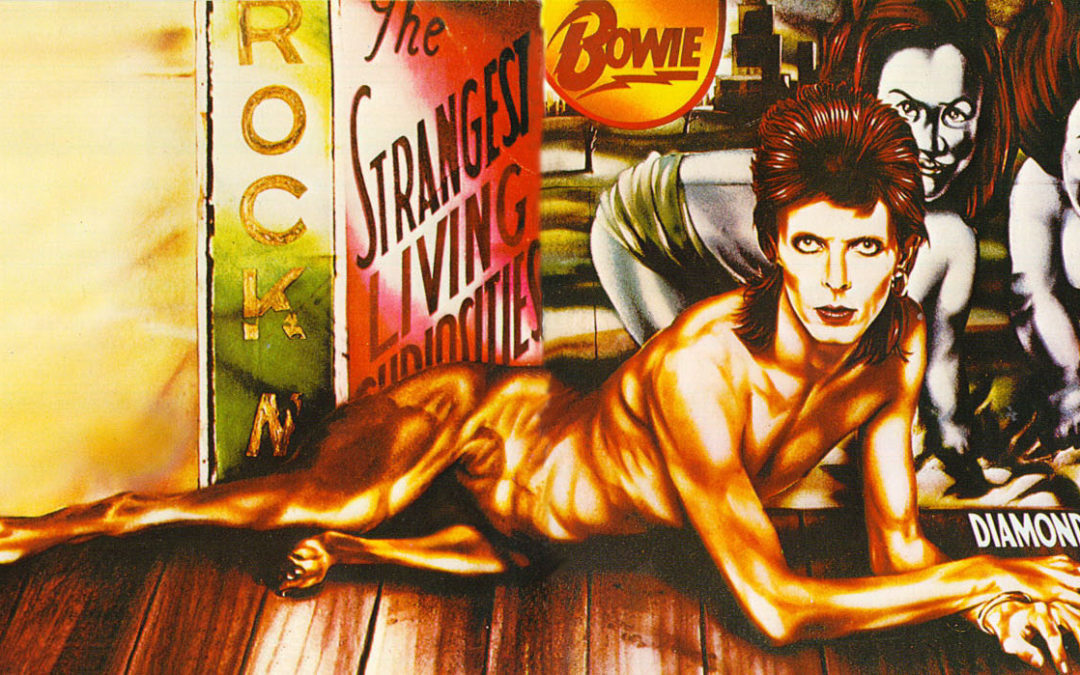 Writing The Hounds and their Half-Hound Master

Bowie’s Diamond Dogs was originally meant to be a sprawling stage show – a glam rock dystopia on roller skates. Its heady post-apocalyptic imagery and dramatic shifts in mood and tone certainly give it the feel of something condensed down, stuffed into a tighter suit – a shape-changer writhing in chains. I wanted to see if I could distil its essence even further, squeeze it into the skinniest jeans of all. Since this was a commissioned work, initially for a live event comprising one Bowie poem after another, I figured I could say nothing in tribute to the man himself that wouldn’t be better said (and better put) by other, more serious fans. So my poem would have to attend to the work itself, would have to be an ‘unwilling collaboration’.

There’s a neat link, in that ‘Sweet Thing’ was purportedly Bowie’s first experiment in cut-up lyrics, a technique he lifted from Burroughs, and I would, in turn, be cutting up and cutting back those same lyrics. There’s a danger too – when lifting from charismatic lyricists, any poem risks having its own character completely overwhelmed.

The first draft had a different title, and stuck rather too closely to a formal trick that seemed good on paper: one line from each song per line of the poem. 11 songs, 11 lines – poem as track listing. Then I rewrote each of those lines ‘in my own words’, as English teachers like to say, using synonyms and substitutions. The result seemed a little too thin, and at the same time too nebulous. I didn’t really expect anyone to get it. References to ‘high rises’ and ‘gangs’ also lent it a whiff of the painfully faux-urban.

So in between pdf proofs of Cold Fire, I rewrote the poem completely, this time starting with a title born out of the album artwork. Given the shapeshifting nature of the songs, and of Bowie himself, and given my own fascination (and affinity) with hybrids and shifty creatures, it was imperative that I snare the image of Bowie as half-dog, half-man in the title somehow, and when the right construction came to me, it also gave me the form of the poem. Bowie as Actaeon Gone Wrong, and his dogpack made up of his choicest, bitingest words, roughly in the order they appear on the album. They’re his droogs, his boys, his girls and his selves, all leaping around him.

I’ve recorded a version of the poem in a style that somewhat apes the opening track, ‘Future Legend’.