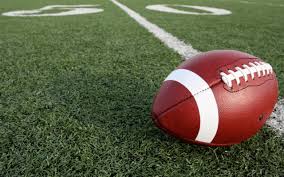 FIGHT SONG  by Paula Bohince
August 2014
A crisis on a monitor, and there’s this
football field, white chalk formalizing grass,
a spongy black track where I walk
off my no-baby weight.

A deadline has passed,
so a journalist will leave this world
violently as I go around an oval dumbly,
like the big hand on a clock,

just a minute inching along,
with the beige high school on the hill,
freshmen cheerleaders learning this year’s
routines, receivers running the yards,

wearing armor under tee-shirts,
obeying a whistle, and it’s clear to all
who’ll be stars and who’ll leave the games
shamed.  I feel like a baby,

born in an American hospital, lost
from its mother, looking around amazed,
then crying from the intensity.
There’s a girl by herself, twirling

a baton.  A toss from her thumb,
and it cartwheels up against clouds:
silvery thrill, tumbling hope.
Someone, over the summer, got his braces

off.  Another lifted weights
in front of a mirror to a rhythm of This year
will be different.  Styles change,
though beauty is always rewarded.

Popular kids will be sent, loved, into
a world that rewards them further.  Others
will hide in the library’s mazes, grateful
to be hidden.  Friday twilight

brings loudspeakers, wet-eyed fathers,
emotional at the anthem, applause
carrying the last watery notes off the field,
as their sons affix their helmets.

Tawny daylilies framing the parking lot
will fade by September.  They’ll die
with the season, this place then transformed
into a little war.  I see the orange-

dressed man as a flower opening forever,
but if I open my eyes, I am dazed.
The marching band will rise in its gawkiness,
belonging to a brief, brassy happiness,

playing the fight song, noise bleeding
into noise, pain mixed with elation,
the coldness of an innocent  trumpet
warmed by the human breath that fills it.

A confession – I am one of that odd, if growing tribe: the British fan of American Football. I am of what I shall euphemistically call ‘original vintage’, being long enough in the tooth to have stayed up late on Sunday nights in the 1980s as Channel 4 beamed this violent, vibrant crash of movement to bemused yet intrigued viewers.

I say ‘confession’ – over the last few years it has become clear that it is a sport which is actively, definitively dangerous to its players. The hits, the high-speed collisions, the damage wrought to bodies in short careers, the evidence of subsequent brain damage in retirement… a taste for this warfare with human weapons is starting to be difficult to admit to in certain company.

And yet, and yet… it retains its glamour, its fascination to me at least; the sense that a particular kind of glory and valour can only be achieved through playing it. And all of those feelings were stirred again by Paula Bohince’s ‘Fight Song’.

The capturing of the sheer ruthless sorting into hierarchies that is part of sporting – and hence wider – life is elegantly done:

obeying a whistle, and it’s clear to all
who’ll be stars, and who’ll leave the games
shamed. I feel like a baby,

As is the hopeless optimism, the “rhythm of This year / will be different.”; the pride of fathers in their sons – these small-town heroes who might, just might, make it on a bigger stage; but also the underlying oddity of these comforting rituals, “the orange- / dressed man as a flower opening forever”.

This poem is a reminder that, for all its brutality, its machismo, the desire to do damage at its core, there is still something noble here, perhaps, that we will miss when the sport is, inevitably, done and relegated to a covert, underground freakshow. And it also says why, deep down, we might want to watch, be a part of any sport, this most glorious of trivialities – for its “silvery thrill, tumbling hope.”