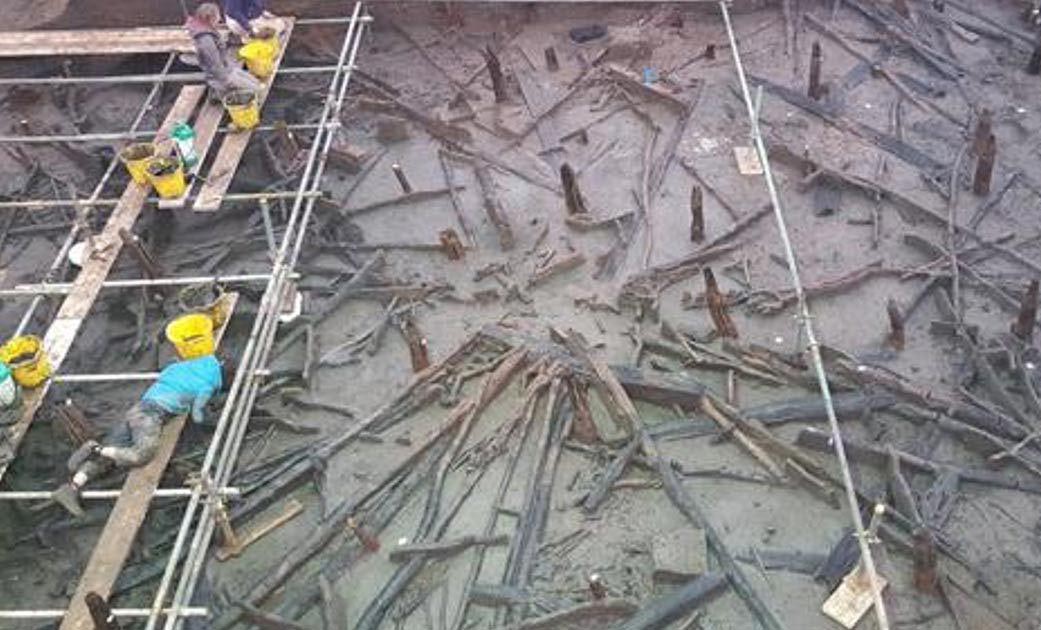 In khaki raiment, the neo
centurion patrols the levee.
Jade North Sea lapping
over the flood defences.
Out in the glimmering,
amphibious trawlers sift

for bivalves. Below,
the salt marsh goes on
for miles of sea grass
& sampha. Boudica punts
her palette raft back to
the stilt houses. A Celtic

knot of eels in a bucket
for breakfast. She is
brown & freckled with
living out in the brackish
sun, how she lives since
the re-wilding of the east.

When the tide sits low,
dunes island like basking
seals. On still days, water
clears, you can look down
on bungalows submerged
churches. They don’t

trouble her, beside a few
insults spat by trawler men.
She rules an omega-three
rich regency, eating eel &
crabs fat with burrowing
for corpses in the silt.

Michael and I had a moment of mild mutual surprise: I said I’d blog about this poem and he said he’d mentioned it in his draft newsletter. Turns out we are both fans of Russell Hoban’s Riddley Walker. Not that I thought of the novel when I first read the poem. I was drawn in by the terse yet intimate storytelling tone, by the detail and mystery. The title could belong to a monograph and the poem’s like a collapsed monograph, much of its content supplied by the reader. The sea has entered East Anglia; that is clear. The land/seascape’s calm, but how deep does that calm go?

The first two lines do a lot in nine words. Neo centurion, raiment, levee – the rescued words are as new/old as the land/seascape. Levee brings back the New Orleans floods. The neo centurion is on patrol – security is needed.

Then we are lulled into a salt marsh pastoral. There’s a raft made from a palette (floated up from Felixstowe?), a lovely “Celtic knot” of eels, “amphibious” trawlers (innovation is still possible), stilt houses (who else has fantasised about living in one of those when doing the Bronze Age at school?). Boudica lives in a world we half feel we know, part Swallows and Amazons, part history – the remains of a stilt village have just been found in Cambridgeshire. The drowned bungalows she looks down on are a future take on today’s Dunwich. The sun is “brackish” (nice word), suggesting that climate change has gone further than risen waters.

Where is everyone? The land/seascape’s sparsely populated. We don’t discover until the last line that Boudica survives by cannibalism at one remove. How long have the corpses been there, does the silt preserve them? What happened? Who are “they” at the end of the fourth verse? Is Boudica living an idyll or living in fear? She carries a brave but tragic name… We learn about her more as presence than character, the future’s resilient, sun-freckled ghost.

The poem’s success lies partly in the way it accommodates various possibilities and leave us to make what we want of them. Abrupt line-breaks give something of the dispassionate flatness syllabics would have, and yank the reader down the verses. There’s assonance and alliteration (eg Celtic/knot/bucket/breakfast). The first and, separately, last line-ends of most verses echo each other (neo/below/../low/few).

There’s a dry humour underlying it all too, as if the poet’s saying, see how weird everything could be… and is. I think he had fun writing the poem. I hope you enjoy it. Please add comments, alternative interpretations, insights, literary references etc below.