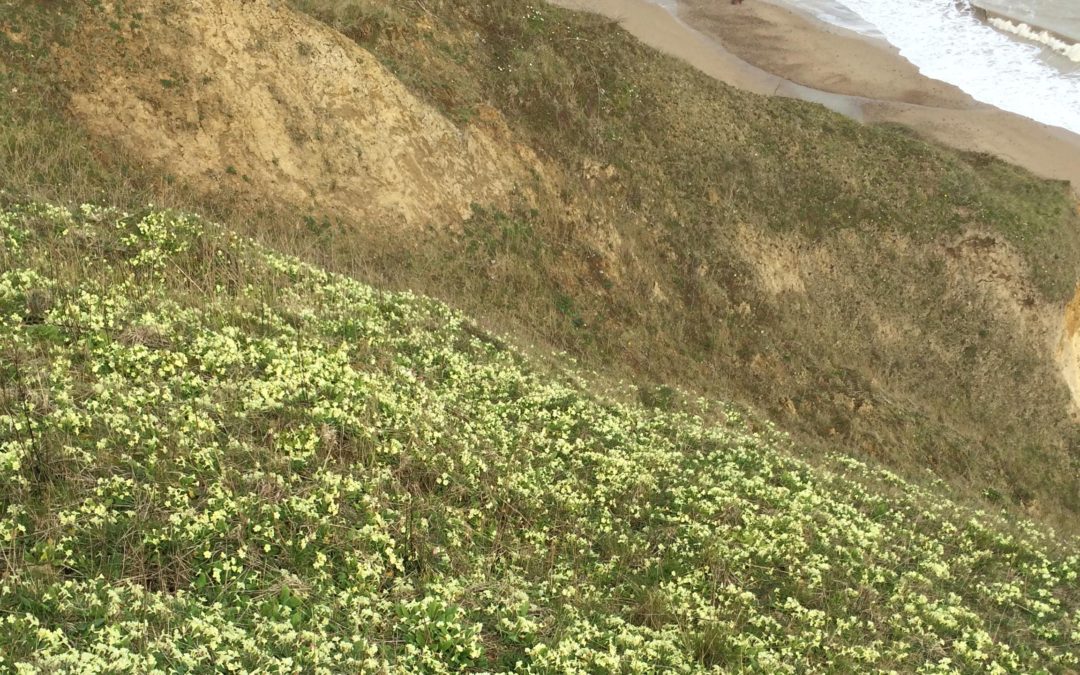 I thought that as it’s April I’d put a photo of primroses at the head of this Newsletter. So I went up to the coast to the place I thought I’d get a good picture, along the cliffs east of Cromer (yes, contrary to the famous Noel Coward quote, there are cliffs in Norfolk). Anyway, I wandered phone in hand through the little cliff top wood but the bank at the edge of the wood, where the primroses were growing, had become inaccessible – there’d been another cliff fall and the bit of pathway that led along the outer edge of the wood had gone. So the picture is of more distant primroses growing on a bit of fallen cliff.

If you travel further round the coast, east and then south, the cliffs, as you walk south from Happisburgh (‘Haysboro’ if you don’t want people round here to look blankly at you) the cliffs get lower. This stretch of quite quickly eroding land is one of the places where cartographers believe the sea might come in and greatly alter Norfolk, there are maps around showing what might happen. We have a neat poem (one of four with Norfolk in them) in the new issue (85, currently being printed) by Matt Haw called ‘A Vision For The Topographical Future of East Anglia’, which imagines a ‘re-wilded’ landscape. And please note his spelling of samphire is deliberately different – he’s a fan of ‘Ridley Walker’, as am I.

That’s a very roundabout way of announcing the soon to be imminent arrival of the new issue. There’s a new poem by Zeina Hashem Beck, whose work in the last issue was much admired, three poems by Melissa Lee-Houghton, a Next Generation, poet who we haven’t published before, other poems by names you’ll know, Les Murray, Chase Twichell, and names you may not know, Charlie Bird and Leo Shipp, for instance. Also a prose piece by Richard Scott on writing.

Richard Scott and Kate Wakeling will be launching their two Rialto pamphlets, ‘Wound’ and ‘The Rainbow Faults’, at Daunts Bookshop in Cheapside (EC2V 6AX if you are travelling by satnav) on April 27 from 6.30 to 8.30. All welcome, come along, hear both poets read and get your pamphlets signed.

We are very pleased to welcome Jo Leverett to the Rialto team. Jo will be known by many visitors to the Aldeburgh Poetry Festival as the indefatigable manager and co-ordinator making events happen in the right places at the right time. She’s moved on from the Poetry Trust to working for the famous restored Regency Theatre Royal in Bury St Edmunds. She’ll also be working with us, taking on much of Katy’s role, as Katy has stepped down in order to finish writing her novel.

One of Jo’s tasks will be to help us co-ordinate and get through the various undertakings that we are committed to in our current GftA grant programme. One of these is to work towards a 15% increase in our sales and subscriber numbers. Anything that you can do to help with this task would be much appreciated. I know it sounds a bit over-inflated as a claim but a new subscriber to a poetry magazine is a significant help to poetry. Being published is important to most poets, essential for their confidence and development I’d say. Maybe if you are on a Creative Writing course you could check out if the organization running your course subscribes and ask them to do so? We hope to be banking on your creativity…

We’ve also tasked ourselves with raising the number of donations you generously send. There will be a donation button on the website soon, and we are also bringing into being a Friends & Patrons scheme which you will be able to join.

So, with issue 85 imminent the team of editors for this issue, myself, Edward Doegar and Degna Stone are rapidly turning, their attention to preparing number 86. This will be the issue that features 15 or so pages curated by the Assistant Editors (they will also be significantly helping me with the rest of the magazine). Expect a sudden (and welcome) increase in the turnaround of your submissions on Submittable, as well as the postal submissions that I’m pleased to note are still arriving. Edward and Degna are proving to be every bit as skilled and enthusiastic as their predecessors on our Editor Development Scheme were. I’m at a loss as to how I managed before I was surrounded by all this brilliant energy.

Helena Nelson has expanded her useful pamphlet ‘How (Not) To Get Your Poetry Published’ and transformed it into an extremely useful 139 page paperback book with the same title. The main chapters, the ‘How (Not) To’ ones, for example ‘How to write a book that wins all the prizes’, are interspersed with sections called ‘Write now’, prompts and exercises to encourage you to write and to expand your writing abilities.

There’s one I’ve just been reading, called ‘The wayward pen’, which is sorely wonderful, and I think I might, if I can back my procrastinator into a cage, try. Helena says, ‘ This one is a little tricky. You need to find a writing implement you don’t normally use and aren’t particularly comfortable with. You might even need to buy it on purpose. Or steal it: stolen pens are particularly good for this exercise…’ By the way I don’t think any court will accept ‘my writing guru told me to do it’ as a defence for shoplifting. But you need to get the book to find out what happens next. There’s also very good information on how not to annoy publishers. It is, as you’d expect from the poet who has created HappenStance Press, a very humane book. And it’s fun. Get it from the HappenStance website, it costs £10, an essential investment if you want to be a published poet: and if you buy the book you help HappenStance to publish more work, perhaps even yours.