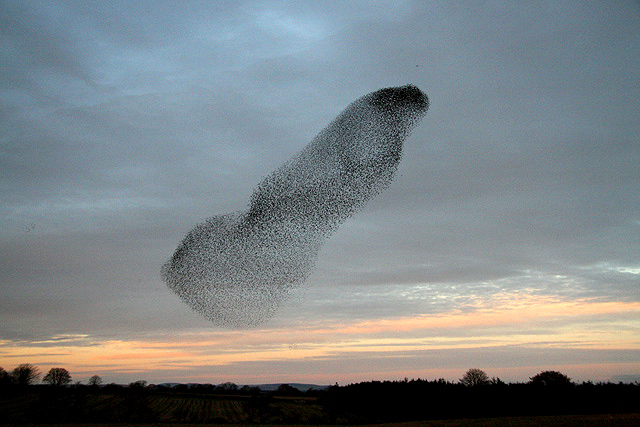 You can read the four prize-winning poems and judge Ruth Padel’s report in the Wet Winter issue of The Rialto, out now; order it here.

And below, as promised, are the six Highly Commended entries, in alphabetical order.

At first the forest filled us with fear –
long rows of pine trees, lifeless
but as the years passed we chopped
and sawed them into cottages
and burned the offcuts to keep us
warm through dripping winters.

Strawberries and raspberries leapt up
in the clearings, made our summers
almost easy. The kids showed no interest
in the place we’d left so on the tenth
year we trekked for two days back to
the overgrown high street. What struck

us most were the birds. Goldfinches swirled
up clouds of thistle fluff and in the birch trees
hundreds of starlings repeated the beeps
of unlocking cars, the Nokia ringtone, sirens
and an ice cream van’s endless repetition
of The Teddy Bears’ Picnic.

You comb your hair with thistles and drink at the burn
while the snow-hare is running. The witch appears
as trees do from mist, offers you a warm egg and
a hearth. She is half-here as a damselfly, threadbare
as the skittering clouds. Take the moths from her hair,
and the spiders; lay them gently in alder, to winter.

After the snowmelt runs and the bog softens, squelching
up to the softest skin between the toes, you will stroke,
for a summer moment, the living antlers of a pool-eyed
young stag, and feel them warm and furred.  Lice dance
on them, black as the snake-sized benign slugs who
seep out of the bracken at night, while you, naked,
walk into a water-moon. You, glaistrig, green woman
who hears insect wings and washes in waterfalls,
will hold herbs and the young deer will leave a warm
lick on your hand, barter for the fistful of watermint.

Here is the Highland fist of tongue-rough, tongue-smooth
rock. Each stone a fingerprint, a map of whorls like
those rippling on a wild goat’s pelt, spelled out in all
colours of moss and time, and each rock, stone, goat
and moss a solace. You remember the living touch
of a long-ago cat, ash coloured and softer than antlers;
you feel the sombre power of mountains. You shift
your feet, toes curling into turf, and cannot say goodbye.
When you drink from that burn and wash off your
weeping, as the hare runs, you will lift your face
and in your hair will be a crown of weed and the
coin of a water-snail, grey as your rain-eyes.

NOTWITHSTANDING     by Alex Josephy

your elderberry eyes; the sleek line of your back; your fawn pelt; the way you ripple when I move near; your creamy underside; your habit of sitting bolt upright, moving your head to and fro; the sheen on your delicate claws that still clutch a morsel of pecorino cheese; your rounded ears that light up in the sun, and the optimistic curve of your tail;  your ceaseless and methodical gnawing, one wire after another, again and again, never for a moment giving up hope; notwithstanding any and all of these,

after nightfall you will be taken from this house, shaken from this cage, decanted onto the North slope of the hill, left to find your own way onward under the moon, through the tall stalks of grass, docks and thistles.

A corona glow of sun rims around
the allium. Its tiny indigo
florets radiate and become a planet.
Over the zenith a forager bee
slowly orbits – searching. Sometimes pauses,
hovering like a nanoscale shuttlecraft,
its booster engines droning, faint zig zag
jet trails soon blurring. Zooming past dew domes
of rainbow slivered glass – poised above –
he pinpoints a blue open flute, alights,
balances; inner telemetry makes
his humdrum task easy. The sepals glide
automatically apart and docking
inside the shuttle bay, he barters
pocketfuls of pollen to fuel his tanks
with nectar. Then vital work over darts
brimful, back to his own waxy warm world,
to tremble dance a precise astral chart
for others to seek the waiting treasure.

A KESTREL CAME TO THE TOWER    by Caroline Squire

Our printed faces turn to the window
to see her silence touch, then rest
on the concrete pillar. We take time
to look into stillness

at the folding layers of cream
and brown, her superior eye,
the flecks of black
on wings lapping with grey,

and though she ignores our perches
where we praise codes inside,
forgetting our beginnings,
she scores a breeze for us

and we beat with envy,
our seated shapes flickering with time,
cram to hold every last bit of flight
until it’s gone, just a spot of grime

on the office window. So now, despite
being fifteen floors above ground
with our dulled view of the ring-road verges,
we’re closer to it somehow.

303 acres of land on the western bank Allegheny River was given to Cornplanter, chief of the Seneca on March 6th 1791 by Thomas Mifflin, the first governor of Pennsylvania.

A bark canoe paddling the broad flow,
a span of tumbling sunlight between
stands of cottonwood and pin oak,

years of thaw and melt, sounding
the white waste in winter, a spike
and a saw slicing through ice, a long

grey fish slimming into view, a spear
and a knife, deer hide stretched tight,
drying by day; by night, a fire,

pale smoke in the mornings, the creak
of saddle leather; silver dollars in spring,
thick pelt of beaver, otter, bear; a hawk

A gift that’s not put to good use
is just asking to be taken back
say Stockburger, Kinnear and Noyes.

A blast furnace is built, a foundry,
a mill race, a warehouse, a landing stage.
The gift passes to the Graff Hasson Company.

In 2006 the city celebrates with fireworks
and a rock concert on the shore line.
But the economy’s shot and folks

are closing down and selling up.
For those who stay, there’s little left
apart from rust, food stamps and hope.