On a painting and poetry 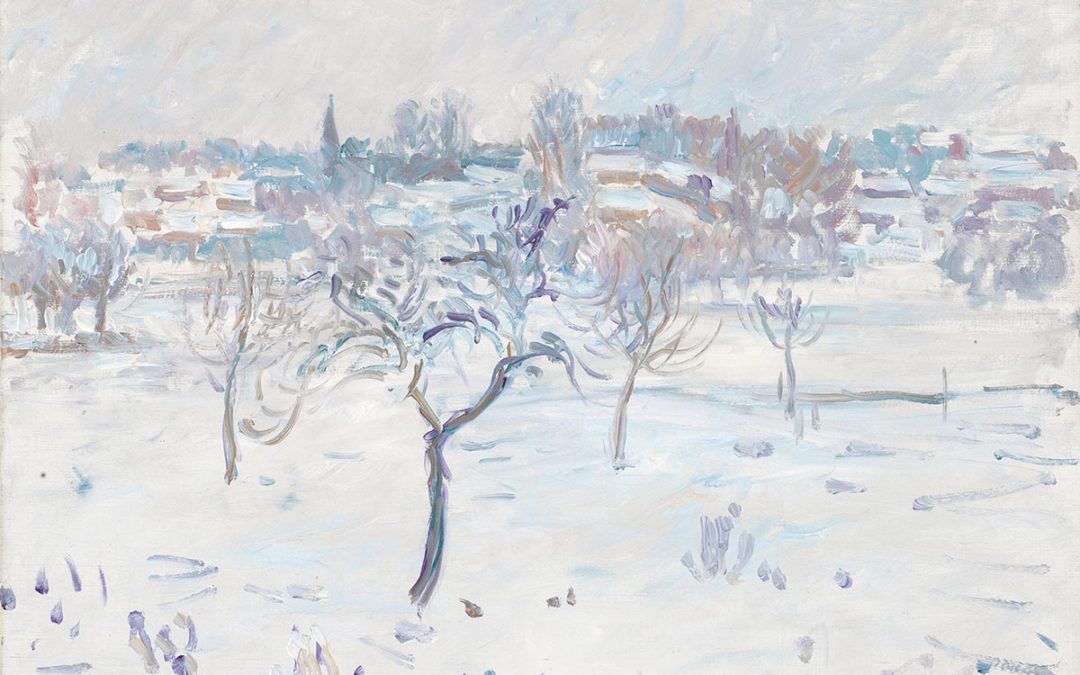 Snowy Landscape at Eragny, with an apple tree, by Camille Pissaro, hangs in a Victorian wallpapered gallery in the Fitzwilliam Museum in Cambridge. Seeing it for the first time, I felt like when you open curtains on unsuspected snow. It’s late afternoon or mid morning, and the village of Eragny lies distant. There are foregrounded fields and, in plenty of lonely space, stand four small bare apple trees.

Knowing his method, standing before this picture, I suddenly realised that sixty-five year-old Pissaro must have gone out there on a freezing day, squeaking through shin-deep snow, probably wearing a pair of suitably waxed boots, several coats, and a good hat and mittens. I imagine him with a pipe, warming numb fingers on its bowl when taking a rest from the application of stinking oils to bellying canvas, and reeking of tobacco. Despite his layers of clothing, and his small movements while painting, he must have been frozen.

Perhaps the cold made him work more rapidly than usual, because he has left visible more brushstrokes than I remember from his other paintings. There are vertical purple curves, by which we understand tall grass poking through snow, and further twists of purple, also green, produce the apple trees. For a painting that at first appears entirely white, actually there are a lot of other colours – reflections, tinges – hints of blue, cream, pink, rose.

Standing before the picture, I recalled a visit to the store of another city museum, packed haphazardly with items the Victorians had amassed that the display cabinets upstairs couldn’t contain: stuffed mammals in glass domes, tribal objects from Papua New Guinea and, the most striking to me, paintings stacked against one another and on bricks to escape damage by one of the basement’s frequent floods. It struck me then how much paintings are actually objects. But Pissaro paintings, unlike most other painters’ work, and in spite of their ornate, faded frames, rarely seem like objects to me. I suppose that is their trick, and success, that these pictures seem unmediated, uncatalogued, the moment itself, the same way the poems of Frank O’Hara or James Schuyler do – cloudy, scumbled weather.