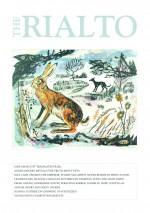 ‘The Mandate’ by Joel Lane

As the first ripple of the crowd’s laughter
struck the air like a window breaking
to let in a fresh autumn breeze,
the Emperor lifted a bare arm
and slowly wiped away a tear.
‘Oh child,’ he said gently, ‘if only
you knew how much strength that laughter
gives to the enemies of our nation.
Laugh, child, laugh. I weep for you
and for us all.’ The laughter died
as if someone had tripped a switch.
The boy looked around, dumbstruck.
Many hands reached out for him
as bottles were smashed, stones picked up.

Three days later, the Emperor was returned
to power by a safe majority.
The swearing-in ceremony was broadcast
so the nation could see a proud man
building on his past, wearing cloth
to cover his nipples, cock and arse:
thin strips of some pale fabric
so pure, so delicate, it could almost
have been the skin of a child.

Every year the selectors for the Forward Prizes ask The Rialto for nominations. We are allowed to enter four poems for the Best Single Poem award. This is hard work for me as in my opinion pretty much every poem in the magazine is a winner. But I would say that wouldn’t I.

Ideally a poem is a perfect balance between the thing said and the way of saying it – content and technique. Sometimes it is the ‘how it is said’ of a poem that nudges into the foreground. In issue 64, for example there’s the technical neatness of the sonnets by Christina Dunhill and Sebastian Barker, the tidiness of Angela Kirby’s couplets in ‘Beech Hill’, or Hannah Sullivan’s rhymes and half rhymes in ‘Vermont’. In other poems it’s the content, the ‘what the poem says’ that I notice most.

‘The Mandate’ is rich in content. It reminds us just how wicked political leaders can be, just how wicked humankind is. It’s a brutal poem, very direct. Its politics are of the moment – there are plenty of tyrants about, some of them ‘democratically elected’- and they are also the politics of the Twentieth Century. I remember reading as a child of lampshades being made of human skin in Germany in the 1940s. This was probably an article in the News Of The World, the preferred reading of Aunty Denny, who wasn’t an aunt but a depressed woman who worked in the same shop as my mother and who for a while came to our house every Sunday for her lunch. She would sit on what we called the settee reading her paper while the cooking was going on, and I would sit at her feet reading the back pages and getting an education.

Sometimes the history that you, as reader, bring to a poem, what it evokes in you, is important in considering its effectiveness. I guess I need to confess in the context of this poem that I was always, still am, nervous of Hans Christian Andersen’s fables – they have, for me, a special sugary darkness.

So here is this poem, in two sections – fourteen lines and nine lines (a measured first part and a rolling, quicker, finale). The opening, ‘first ripple,’ is slightly journalistic, but this is appropriate in the context, the poem is, essentially, a news report. The second line shocks – we move from ‘laughter’ to ‘struck the air like a window breaking’. ‘Breaking’ sounds the destructive note that is the poem’s theme: it’s echoed in the last line of this section ‘bottles were smashed’ (again glass). Also, our expectations are broken – the original story is turned on its head: and innocence is also shattered, the boy is ‘dumbstruck’. (The point of the original tale is that it’s the boy who is allowed to put into words what everyone is seeing and thinking). Joel’s Emperor is far from Andersen’s fop – he has the true power of tyranny, when he speaks, everyone listens.

I’m impressed by the unobtrusive use of poetry techniques – the poem is helped along by the use of rhymes and half rhymes – in the first part ‘air’ ‘bare’ ‘tear,’ and in the second section ‘swearing-in’, ‘thin’, ‘skin’. I read a lot of poems that are larded with alliteration: here the repetitions of ‘s’ in line 14 are deft and effective. And look how the rhythm is slowed in lines 17, 18, 19, (the long vowels), effectively emphasizing the pomposity, lulling the ear before the shock of ‘nipples, cock and arse’ (short vowels) (brief words). And it’s neat, too, to have the word ‘almost’ hanging at the end of the penultimate line, so you get a little pause before the body blow of ‘…have been the skin of a child’.

It’s a shocking poem, a poem for our ruthless times, and one that is skilfully written.

My second choice, if I had to make one, would be Judith Taylor’s superb poem ‘Islands’ (page 18). It’s a six stanza poem, beautifully hinged around the word ‘paper’. The key word, though it’s only there three times, is ‘slow’. There’s a calm pace to the whole poem, like waves languorously curling onto a summer shore, brilliantly evoked by long vowel sounds. More great writing inThe Rialto.

JOEL LANE is the author of two books of poems, The Edge Of The Screen and Trouble In The Heartland, both published by Arc publications.