A Day At Wicken Fen 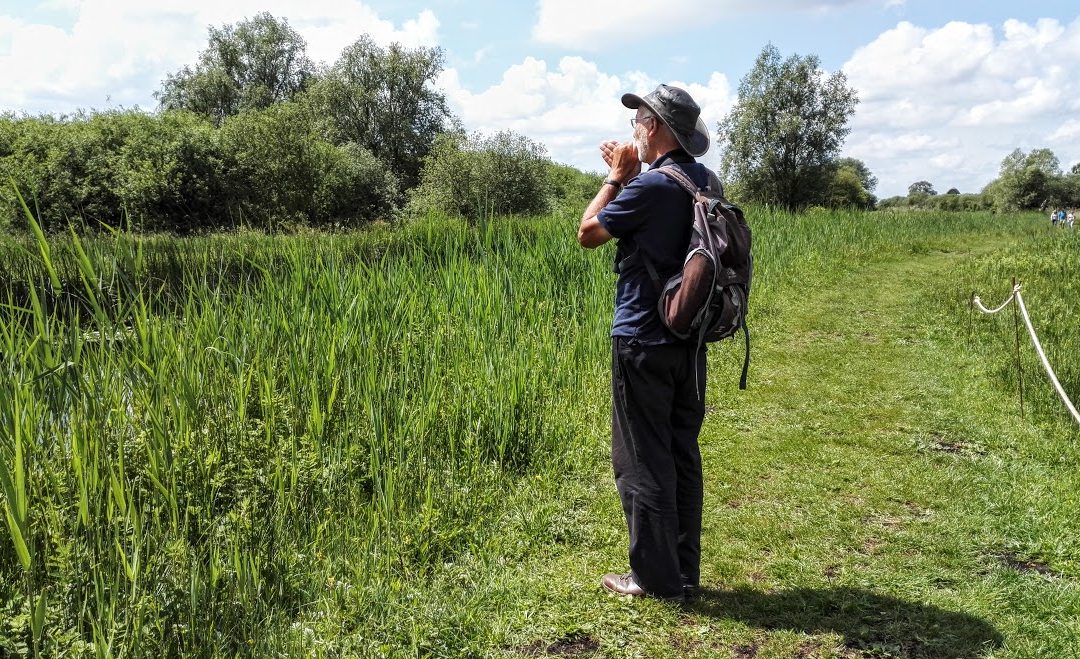 It was a great privilege to spend a day at Wicken Fen, near Ely, in the company of Professor Nick Davies, who has grown to love this undrained, species-rich Fen after studying it daily for more than 30 years.

Nick is an expert on the behaviour of cuckoos and how they parasitise the nests of reed warblers. With a long stick, he parted the reeds and showed us a reed warbler’s nest – made of old reed heads, bound and strung between four reed stems with spidersillk, the snug cup deep enough to withstand the sway and lash of rough weather.

He had marked each warbler’s territory along a stretch of the bankside of the lode (a man-made waterway), and knew where the secretive female cuckoos perched to watch the warblers as they laid their clutches. It’s the males who make the familiar cuckoo sound and, cupping his hands, Nick blew cuckoo and was able to summon a male who flew in angrily to find out who was in his patch. The cuckoo was cross but we were thrilled.

Nick pointed out different kinds of dragonflies and damselflies and we saw a hobby hunting them. Marsh harriers wheeled over reed beds. White and yellow waterlilies grew in the lode, and ragged robin, marsh thistle and orchids of various shades of pink grew among the reeds. The play of sunlight amongst the stems was beautiful.

Nick said that every day there was something new to see. “Look, a kestrel,” he pointed as it flew past. Then, “Bloody hell! It’s a hepatic rufous female!” This is a very rare chestnut cuckoo colouration, and he had only seen it once before in 30 years of bird-watching. Witnessing his excitement and pleasure at this was as much a treat as seeing the rare bird itself.

From the top of a tall hide we looked out over the Fen. It is a haven for wildlife, surrounded as it is by dry and intensively farmed crop fields. Like Fenland waterways, it stands higher than the drained land around it and, despite the efforts of conservationists, it is slowly drying out. Rainfall in the area has declined and that doesn’t help either. But there are plans to join Wicken to other Fenland reserves nearby and there is a determination to manage and conserve these important wetlands which are literally life-lines for so many species.

What a wonderfully imaginative prize for a Nature poetry competition this was. Thanks to Matt Howard of the RSPB for thinking of it and to Professor Nick Davies for bringing it alive.