The Seagull now eating my sandwich by Emily Wills 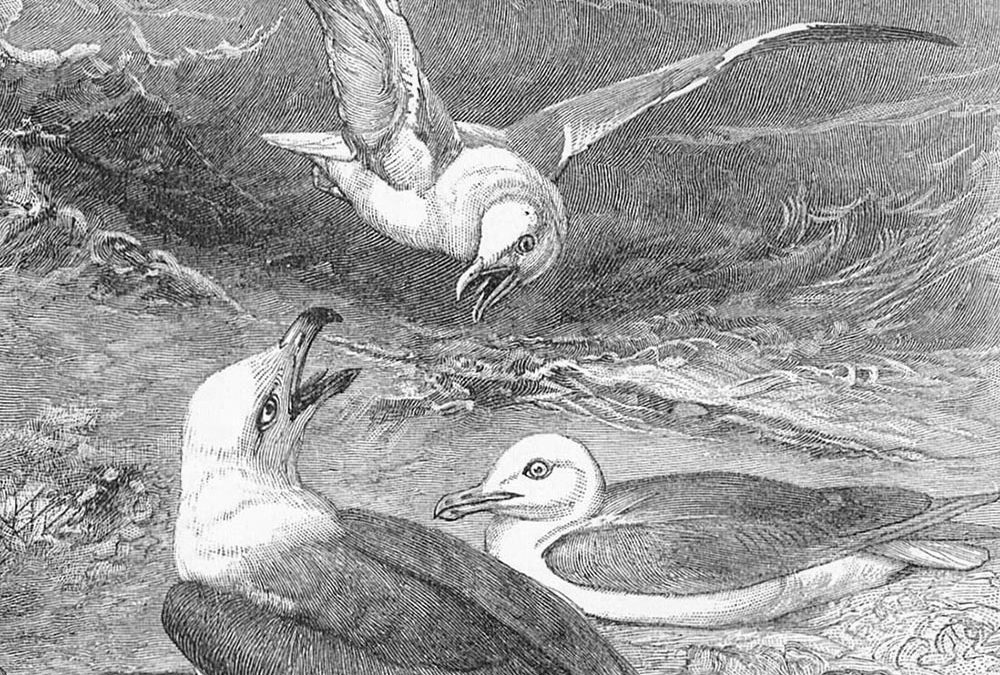 The Seagull now eating my sandwich   by Emily Wills

computes a multimap of all the local take-outs
behind his brassy glare. Bird-brained, above us all,
he sat-navs through south-westerlies, tunnels low cloud,
champions right of way over starling and rook.

Inland, he takes his Welcome Break, a chocolate-
churning field, wormy with screech and stab.
Whichever familiar of mine ploughs up these parallels
drives on, his Massey Ferguson unnoticed as a bird would be

on Google earth. Refuelled, my sleek-headed plunderer
unfolds his creased, delineate wings, then hits
the tarmac of the sky. From the outside lane
he landmarks services – MacDonald’s car parks,

bus stops, playgrounds, bins – his focal point
the sea. Here is the stoneground beach
crusted with cliffs, its trolley-dash of fishing boats
unloading their cheap-as-chips along the quay,

I’m usually wary of poems where the title runs straight into the first line, but this works, enlarging the immediacy of the ‘NOW’, the shock of the event. There’s such a lot going on in this poem (and here’s one of the whys of my liking poetry, its ability to layer so much together in short spaces). There’s energy and movement ‘sat-navs’, ‘tunnels’, ‘churning’, ‘drives’, ‘refuelled’, ‘hits the tarmac’ etc: there’s comment about maleness, or a kind of maleness – the gull is ‘he’, and the kind of he that speeds about on motorways (there was a time when a ‘rep’ was a travelling salesman, not a set of gym exercises). There’s also the tractor driver, referred to as ‘familiar’ – there’s more about him, I think, in the poem ‘Long Lane’ on page 14 of the pamphlet. There’s perspective, ‘above us all’, ‘Google earth’, with its ultra zoom facility, there’s urban slang, ‘trolley-dash’, ‘cheap as chips’, there’s elegant language, ‘sleek-headed plunderer’ in one line followed by ‘his creased, delineate wings’ ( and I’m suddenly thinking of G.M. Hopkins’ and his ‘The Windhover‘). In short there’s four stanzas of general ‘screech and stab’, and then a space and the complete change of the last line, slowed to stillness ‘and here I sit’, ‘gulled’ (which is a fine old Shakespearian word meaning fooled/exploited) ‘open-mouthed’ as in about to eat the stolen sandwich but also speechless/about to speak, and the mysterious ‘unmapped’, which I take to be, in previously unknown territory/ not knowing quite where. It’s also the title word of the pamphlet which adds a resonance – something about the shock of unfamiliarity. And it helps us to know that this poem is also about different visions, seeing differently, maybe not with the ‘brassy glare’.