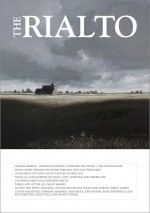 Two poems in Magma and four in this issue of The Rialto is perhaps not enough evidence to warrant announcing a startling new poet. Nevertheless Nadia Al Fazil Kareem’s work is fresh and assured and has a voice of marvellous variety ranging from rage to laughter to romance. Read the magazine. Let us know what you think. We don’t know anything more about Nadia than that she writes from London, is the only member of her family living in Britain and collects Indian miniatures.

There’s an embarrassment of riches in this issue, two poems by Anna Crowe, two by Philip Gross, Lorraine Mariner, Les Murray, Elizabeth Smither and the same number from George Szirtes. But the poem I’ve chosen to write about is ‘Grey Eyes’ by Gaye Farrow, who teaches in a primary school in Hertfordshire. This is an adventure into a world where Clarissa Estes’ much loved Women Who Run With The Wolves meets Catherine Cookson, or maybe the high fiction of 1950s Women’s Own magazine (‘She Was Just As High As His Heart’). On-line blurb for Women Who says ‘Within every woman there lives a powerful force, filled with good instincts, passionate creativity, and ageless knowing. Her name is Wild Woman, but she is an endangered species…’ Here is the poem.

If I had grey eyes
I would narrow them to splinters against the cold;
see the world
through prisms of ice on my lashes.
I would watch the wolves
flicker from shadow to shadow among the dark pines
around my cabin; their eyes of yellow-gold
unblinking.

The throb of hooves.
A horse, the colour of smoke, crashes into the clearing.
The rider leans down, takes my hand –

I’ll not be leaving.

If I had grey eyes,
flames would kindle in my irises
as I gazed into the peat fire burning
in the hearth of a stone croft.
I would sit at my loom
in a shawl of heather and soft green,
weaving the threads of a complicated story.

I rise to stir the pot of carrots, onions, neeps.
The night is pierced by spears of rain
and wind rattles in the chimney like a drum.
A footfall, then
the door flings open; slams against the wall –

I’ll shelter him a while.

If I had grey eyes
they would reflect the colours of the sea;
amethyst – turquoise.
I would shade them from the sun with a thin, brown hand.
My skirt, wet-hemmed
would be caught up on one side.

I’m running along the tide line,
barefoot on shingle and green sea-glass
to a boat pulled up beside a breakwater
where nets are slung, waiting to be mended.
A man, face deeply lined,
with salt-thick hair and roughened hands,
smiles.
His boat, blue as the sky with a rusty sail,
pitches us through the surf –

out, over the arc of the horizon.

Grey eyes, relatively rare and therefore exotic, are typically found in people on the northern edge of Europe and in romantic heroines. I’m prepared to bet that the crazy sightless mother of the mad villain in John Buchan’s The Three Hostages has grey eyes. Ever noticed, by the bye, how Buchan’s heroines so often have ‘slim boyish’ bodies? Anything is possible in poetry so it could be useful to note that the Graiae in Greek mythology were the three crones, guardians of the road to the Gorgons’ home, who shared an eye and a tooth and whose names translate as Horror, Dread and Alarm.

The poem is in three sections (of twelve, thirteen and sixteen lines), each of which has the potential to be a novella and all beginning with the same announcement – ‘If I had grey eyes.’ In the first section we have a heroine who actually lives among wolves – I think it fair to assume that the ‘I’ is female because of the skirt in the last section. What so distinguishes this poem is the skilful choice of words; look for example at the short fiercely active verbs – ‘flings,’ ‘slams,’ ‘slung,’ ‘pitches.’ And it’s very visual, we have colour and movement in each section: here Dr Zhivago, the film version, meets Mills and Boon. I particularly love the horse, ‘the colour of smoke’ and how it ‘crashes’ into the clearing. Then there’s the delicious twist: we expect a rescue – the rider ‘leans down’ – but the narrator is firm, and won’t be leaving. Lovely.

The second section repeats the story frame of the first one, the scene setting, Celtic this time, the ‘stone croft’, with, of course, a ‘peat fire’(note that it’s not ‘turf,’ that would be too close to Seamus Heaney). And again there’s the sudden arrival of a hero, but once more one who doesn’t carry away the heroine. We’ve had the rescuer, now it’s the turn of the fugitive (recollections of Bonny Prince Charlie). The line ‘Weaving the threads of a complicated story’ – very neat in the way that it teeters on the edge of bathos – persuaded me on the first reading that the poet had had a great time writing this work. Ah the strength of these grey eyed women, she, ‘shelters him awhile.’

Where to next? Of course, we go to the sea (how many beach scenes in romantic fiction and film?) It is a fact, by the way that grey eyes pick up colours from the environment. Again the details are lovingly re-created, the ‘thin brown hand’, the skirt, wet at the hem and ‘caught up at one side’ – the height of permitted eroticism in the 1950s, as was any woman running barefoot along a beach. The heroine (finally) finds a man to share (at least for a time) her life’s journey. As befits the genre he is one of those lucky older men, with a lived in body and hands that know what to do.

There’s no getting away from the fact that Classic literature started off, in The Iliad, with a woman being carried off in a boat. And here the boat is blue, the colour of the seducer’s boat in Brian Friel’s Dancing at Lughnasa.

This is a poem about the power of imagination and the ability it gives us to free ourselves. Escapist fiction is, of course, a recreation, play, but it does remind us that there is the possibility of change. I’m reading myself to sleep with Ian Rankin’s Rebus novels at the moment and, after writing most of this piece, I came across the following:

Johnny had shown her another road she might have taken, and in doing so had opened up the possibility of all the other roads left untravelled, all the places she’d never been. Places like Emotion and High and Elation. Places like Myself and Free and Aware. She knew she’d never say these things to anyone; they sounded too much like stuff from the magazines. Born and bred in the town, lived most of her days there: did she really want to die there? ………………..
She wanted more.
She wanted out.

Interesting to reflect on the thought that Self Help articles and books, with their transformative case histories, have taken over much of the ground occupied by light fiction.