Hearts and other organs

I remember a museum of glass bottles,
shelf after shelf rising to the ceiling.
Were the skylights domed? Does it matter?
The light was granite-flecked, dimly illuminating
a Victorian freak-show of medical specimens –
speckled, puckered, gill-like tissue all in tall flasks
floating down the years in liquid chemicals;
an army of jetsam collated and collected.

I remember the foetuses, some wrapped in cauls –
the sailors’ lucky charm – others so transparent
I could see the heart behind the shadow of the lungs,
the armour of ribcage, the hands and nails
curled bleak and beautiful as plainchant,
rocking in their sea of loss. 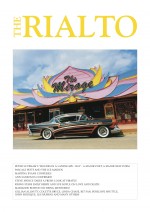 There are wonderful poems to choose from in No 65. The issue opens with Peter Scupham’s ‘Figures in a Landscape: 1944’. This is a war poem, remarkable in being written so long after World War 2 – ‘Pain is so far away it has become lyrical’ – and very pertinent as there is, again, war, and particularly war where destruction often comes out of the air. Technically brilliant, it’s a poem in seven sections, mostly short lines, with many short three and four line stanzas, and very effective use of rhyme etc., etc. It’s a child’s view of the time and place, but the child is now in his seventies.

The evocation of time and place, the sense of being there is also foreground in a couple of other poems I’d like to mention; Valerie Lynch’s ‘Barricades’ and Sydney Giffard’s ‘Au Lavandou’. Valerie started writing poetry three years ago when she was 77. And I can’t not mention Steve Spence’s three pirate poems that close the issue. I think they are likeable, funny and intelligent, their satire exact for our times. I’m keen to know your responses.

‘Hearts and Other Organs’ is a sonnet – the poet has divided it up into its octet and sestet – and I like the device of starting each section with ‘I remember’ and, particularly, like the switch from indefinite to definite article, from the general to the particular, ‘I remember a,’ ‘I remember the.’ The title drew me: the poetry heart is usually an amorous organ ‘My true love hath my heart’ and so forth. These hearts are, I think, going to be something else. Or are they? Maybe its a poem about love and sex? Not, surely, about music? I don’t know, but you can see I’m hooked. Short poems need titles that haul you in, just as they need to open well and close well.

This poem opens with a neat tease, ‘a museum of glass bottles’ (what’s this to do with hearts?) And the scene is then set, atmosphere created, ‘granite flecked, dimly illuminating’. I don’t stop to think about ‘granite flecked’ on the first reading, but on the second reading I note that granite is hard and that it is a gray rock with all those curious cold glittery bits in it. These sensations of hardness and coldness lead into the ‘Victorian freak-show of medical specimens’. Such a lot going on here, both in content and in feeling: ‘Victorian’ is about time past, but also still carries associations of crowded fustiness (those domestic interiors in illustrations), and you have to add in connotations of imperialism. The Victorians collected things, they had guns with very small shot for killing humming birds and the larger butterflies, bigger guns for annexing bits of Africa. Note, in passing, ‘army’ appears in line eight. ‘Freak-show’ brings the shock of the abnormal, the odd, the deformed, with their gawping crowd, whereas ‘medical specimens’ has the weight of scientific approval, clinical distance. I love line six: just look at how all those ‘k’s and ‘l’s are working together – also how ‘speckled’ echoes the earlier ‘flecked’. This poet is good at tying things together. There’s a gap between lines eight and nine but ‘army’ in eight is echoed by ‘armour’ in line twelve, and we have ‘jetsam’ in line eight, which is what you chuck overboard from a ship, and ‘sailors’ in line twelve. The poem opens with ‘museum’ and the first half closes with ‘collected’.

There’s a pause. This is a clever, profound, poem by a poet who takes risks. I like it. The poem slows down, focuses, looks closer, into the glass bottles, into what’s in the bottles (we travel by way of a nod at the fear of drowning), and what we see is the heart, behind ‘the shadow’ (remember the valley of the shadow) behind the ‘armour’ that afforded no protection. Finally we are looking at the ‘hands and nails.’ They’re what everyone notices about the newborn ‘o look at her tiny hands and nails, so perfect’. Except here it’s ‘foetuses’ we’re looking at. Casualties of love, the miscarried, the stillborn, those captured, collected, by we don’t know what method or disaster.

The last two lines of a sonnet are supposed to deliver a kick. Wordsworth –
‘Dear God! the very houses seem asleep;
And all that mighty heart is lying still.’ John Donne ……… ‘I
Except you enthrall me, never shall be free,
Nor ever chaste, except you ravish me.’ And so on. Here we have
‘curled bleak and beautiful as plainchant,
rocking in their sea of loss.’
If you’d been wondering about the sea/drowning references earlier in the poem here’s why there there – to lead up to this ‘sea’. And isn’t that ‘plainchant’ a wonderful surprise? Nothing in the poem anticipates it. The museum transforms into a church, the idea of prayer arrives in the sterile room. We are all reminded of the central place loss occupies in the experience of being human. Wow.

On a technical note it’s worth saying that the vowels in the octet are often short, closed, while those in the sestet are much more open, longer. There’s also assonance and consonance, plus bits of rhyme and the, I think, very important ‘transparent’, ‘plainchant’.

I realise that I have taken a lot of space talking about this short poem. I also know that I could go on and say more. I hope I’ve said enough to show why I choose to publish it, why you might enjoy to read it. There’s quite a lot of other poems in the magazine that I like as much as this one……

FRANCES ANN KING trained as an RGN in the 1970s. She has just completed a degree in Creative Writing at Bath Spa University.